A very BRIEF summary of the Dance


Raqs Sharqi:  people call it Belly Dance, Middle Eastern dance and Oriental dance. It primarily uses the hips, not the belly, and can be traced back to village folk dance in Arabic countries originally meant for community enjoyment, not public performance.

Today's Egyptian style stems from the Egyptian ghawazee of the 19th century, traveling female performers who danced in the streets often accompanied by live music. They used rapid hip movements and finger cymbals in their dance and were not looked upon well by society since they performed for men with their faces uncovered.

Influenced by these rural village dancers, classical ballet, and old Hollywood, Egyptian raqs sharqi made it's way into the night clubs and cabarets of urban Egypt in the early 20th century, was popularized in the golden age of the Egyptian film industry, and has made it's way around the world- being adapted and fused with new elements along the way.

Sahra Saeeda's Journey Through Egypt courses are invaluable for further study into the Egyptian roots of belly dance.

You can spend a lifetime researching this topic.  Many people do.  No one article or source will give you all the information. I encourage you to dig deeper on your own and see where the journey takes you. 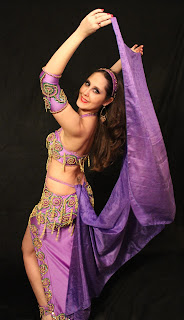 A student of dance my entire life, I have studied, performed, and choreographed jazz, tap, and modern before finding and falling in love with the movements of belly dance in 2007.  My interest lies primarily with Egyptian style raqs sharqi and folkloric.

My mentor is Rachel Kay Brookmire of Washington, DC.  I have also been greatly influenced by my study with Mohamed Shahin and Jillina, though, I'm a melting pot and have been influenced by many beautiful women and incredible men.  I believe we learn something from everyone!

I'm currently a certified instructor of SharQui, the Bellydance Workout.


Outside of dance, I am co-producer and marketing director of Ningen Manga Productions, LLC, an independent film and video production company.

Al-'Anqa
My dance name, Al-'Anqa (Al ENG Kah), is Arabic for "Phoenix". I'm a belly dancer of Egyptian style Raqs Sharqi, Egyptian Folkloric, and sometimes American Cabaret dance styles. This site is intended as a place for me to collect my writings related to the dance, arabic culture and politics. A record of my personal journey to understand my small place in this ever growing dance community. 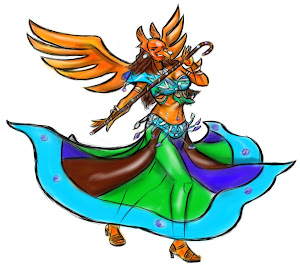 Connect with me Online